Today, I want to whisk you away to the mountains. What I have for you is a beautiful photo story of the Ali Bedni Bugyal trek (I’m weak in the knees just making the photo story!). It takes you through the whole trek, with some of the most stunning pictures from our archives.

I have selected photos to show you what the trek will look like in March and April. You will notice many of the photos have a lot of snow in them. That’s how the upper reaches of the trek are in March-April. You will also see lot of photos in green, because that is also a high possibility. Green or white, the trek is a stunner, so I am going to take you through both settings.

Last week, we had a fresh bout of snowfall. So we quickly hurried Ravi Ranjan, our Slope Manager, to take us through the trek with virgin snow on it. He was more than happy to go on the trek and send us these photos.

Note: You’re not likely to see as much snow, but you will see a good amount of it in March and April.

I also have a bonus exploration story of the Ali-Bedni trek with one of the best storytellers I know — our founder, Arjun Majumdar. I recorded it yesterday. It is a story rarely shared with the rest of the world.

With that, let me waste no time. Let’s get started.

“What trekkers don’t know is that at Lohajung, they’re actually standing at a mountain pass,” says Arjun Majumdar, the founder and CEO of Indiahikes. “On one side, you have the valley that faces Ali Bugyal and behind you, on the other side, are the endless rolling hills towards Gwaldam and Karanprayag,” he adds.

2. A View of Kuling from Lord Curzon Trail

A big bonus on the Ali Bedni Bugyal trek is that you start your trek on the legendary Lord Curzon trail. “All the way from Lohajung until you hit the banks of Neel Ganga, you trek down the Lord Kurzon trail. Despite its fame, this section of the trail is rarely trekked on,” says Sandhya UC, the co-founder of Indiahikes.

“One of my favourite views on this trail is that you see a sweeping view of the Kuling village on the left side. You see it flowing gracefully down the hillside,” says Sandhya.

3. Spending time by the waters of Neel Ganga

Taking the Lord Curzon trail, you descend towards Neel Ganga river. After a long descent, trekkers love dipping their feet in the cool waters of this river. You cross a small iron bridge here, to get onto the other side of the river.

From the Neel Ganga river is where the true ascent starts. “It takes 47 switchbacks and 2-3 hours of stiff climbing to reach Didina. For the first day of a trek, this is quite a climb, but gives trekkers a good warm up. It makes the rest of the trek days a lot lighter on the legs,” adds Sandhya.

Didina is a unique village. It is perched on a plateau that juts out of the mountain face, like a ramp. You almost climb a sheer cliff to get to the village. There’s a beautiful camping just above the village, looking out towards the valley. This is where we camp.

From Didina, there are two ways to reach the Ali meadows. Most take the direct route to Ali, climbing above Didina in quick switchbacks to breakout of the forest just below the main Ali hump.

Then there’s a second trail, that most trekkers miss out on. This goes via a clearing to the right of Didina, at Tolpani. This trail takes trekkers through some of the most stunning oak and rhododendron forests they will ever see. Even better are the clearings in the forest. This trail is something that every trekker must stop and take notice of.

“These are few of the densest oak forests I’ve trekked in,” says Arjun. “Under you is a never ending carpet of brown leaves. You see intertwined roots, criss-crossing over each other. You see moss-laden trunks, soft as a carpet to touch. I think the trees in the forests are over a 1,000 years old,” he says.

6. Unexpected clearings in the forests of Tolpani

“Out of nowhere, in the middle of these forests, you see lovely clearings. In winter, these clearings are covered in snow. Later in spring, they will be green and lush. It’s one of the most endearing sights our trekkers will see. It’s straight out of a fairy tale,” says Arjun.

The story of how we chanced upon Tolpani

Tolpani is not a regular trekking route. Almost no trekkers take this route to any trek. It’s mostly used by shepherds, and even amongst them, it’s rare.

There’s a very interesting story behind how our founder, Arjun Majumdar, learnt about this place when he was trekking there nearly 15 years ago.

I got a chance to record the story. In it, he recollects the misadventure that occurred in the summer of 2007, when they discovered Tolpani by accident. Give it a listen here.

7. Bursting out of the forests to stunning mountain views

As soon as you exit from the forests, you enter the beginnings of Ali Bugyal. The mountain views that you see here are just a glimpse of what’s in store for you in the near future. “I stood rooted to the spot when the mountains loomed in front of me,” says Ravi Ranjan, our Slope Manager.

8. A rare sunset view at the Z Point, Ali Bugyal

You know, even though we have taken thousands of trekkers to Roopkund, none of them have been able to witness sunset from Ali Bugyal. The timings don’t match, the itinerary doesn’t give you the time, a lot of things don’t fall in place. Until now.

On the Ali Bedni Bugyal trek, you have the luxury of witnessing a sunset from Ali Bugyal, which is something that can bring even the most stoic person to tears.

9. Be in Ali Bugyal for the sweeping view of alpine meadows with mountains rising out of them

The specialty of Ali Bugyal is that you not only see one of the grandest alpine meadows of our country, but you are surrounded by some of the most famous big mountains of India.

You see Mt Trishul and Mt Nanda Ghunti right ahead of you. On your left, you see the Chaukhamba massif, Neelkanth and Hati Ghoda and the whole family of greater Himalayas mountains. It’s a rare sight to see these off the meadows.

It’s the privilege of camping at Abin Kharak, a clearing right outside the forests of Gehroli, that allows you all the luxuries of sunsets and sunrises on this trek.

The campsite is so strategically located that you can just quickly climb up to Ali Bugyal anytime.

11. Trekking alongside Mt Chaukhamba and the surrounding ranges

Traversing from Ali to Bedni Bugyal is one of the most pleasurable walks. It’s a flattish walk along the meadows. Behind you and ahead of you are endless carpeted meadows. On your left is this stunning view of the Chaukhamba massif and the surrounding ranges. It’s a sight to behold.

12. Spending an entire day in the meadows of Bedni

Need I say anything about the meadows of Bedni? They are few of the most renowned alpine meadows of our country! With the entire west face of Mt Trishul jutting right out of the meadows, trekkers are usually zapped by the views.

13. A chance to visit Bedni Kund

Bedni Bugyal is not only about the meadows, but also about visiting Bedni Kund. With Mt Trishul and Mt Nanda Ghunti reflected in the waters of the Kund, it makes for a near-spiritual experience for most trekkers.

With the itinerary we have designed, trekkers get a chance to spend a whole day in the Bedni meadows, have lunch there and then climb to Bedni Top.

“From Bedni Top, you get to see not Mt Trishul as a mountain, but the whole massif. It’s like a wall of mountains that you see, all the way from the base to the top. It is the rarest of rare views! ” exclaims Sandhya.

15. Camping in the forests of Gehroli Patal

After a visit to Bedni comes the cherry on top — camping in the forests of Gehroli Patal. The name says it all. It is a deep, dark netherworld. Ask any trekker who has camped here and they will tell you that they may not have camped in more enchanting forests! Surrounded by tall oak trees with deep, dark trails streaming out of the camp, it’s one of the best forest camps we have.

16. Descending back to Wan through dark oak forests

The final stretch of the Ali Bedni Bugyal trek involves a descent from Gehroli Patal to Wan. Again, these forests can give the forests of Tolpani some serious competition. They are deep dark, and considering you’re effortlessly descending on these switchbacks, they make for a great end to your trek!

Of course, photos don’t do justice to most of the experiences. So I hope you get a chance to be there in person to experience it.

We still have few slots open for this trek in March and April — two of the best months to do this trek.

Find all the details of the trek by clicking on the button below.

Do you have any more pictures of these meadows you’d like to feature? Please mail them to me on [email protected]. I’d love to feature them!

Also, I would love to know, which section / photo you liked the most, and why! Drop in a comment below with your thoughts. 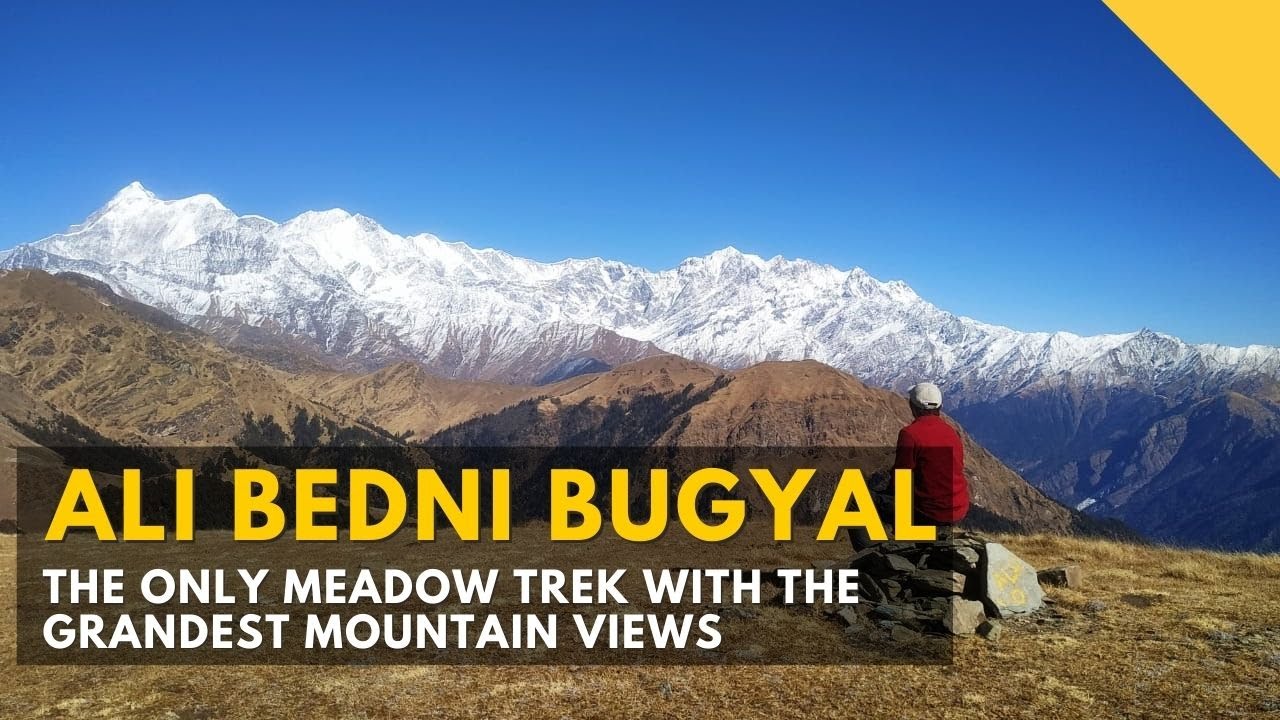 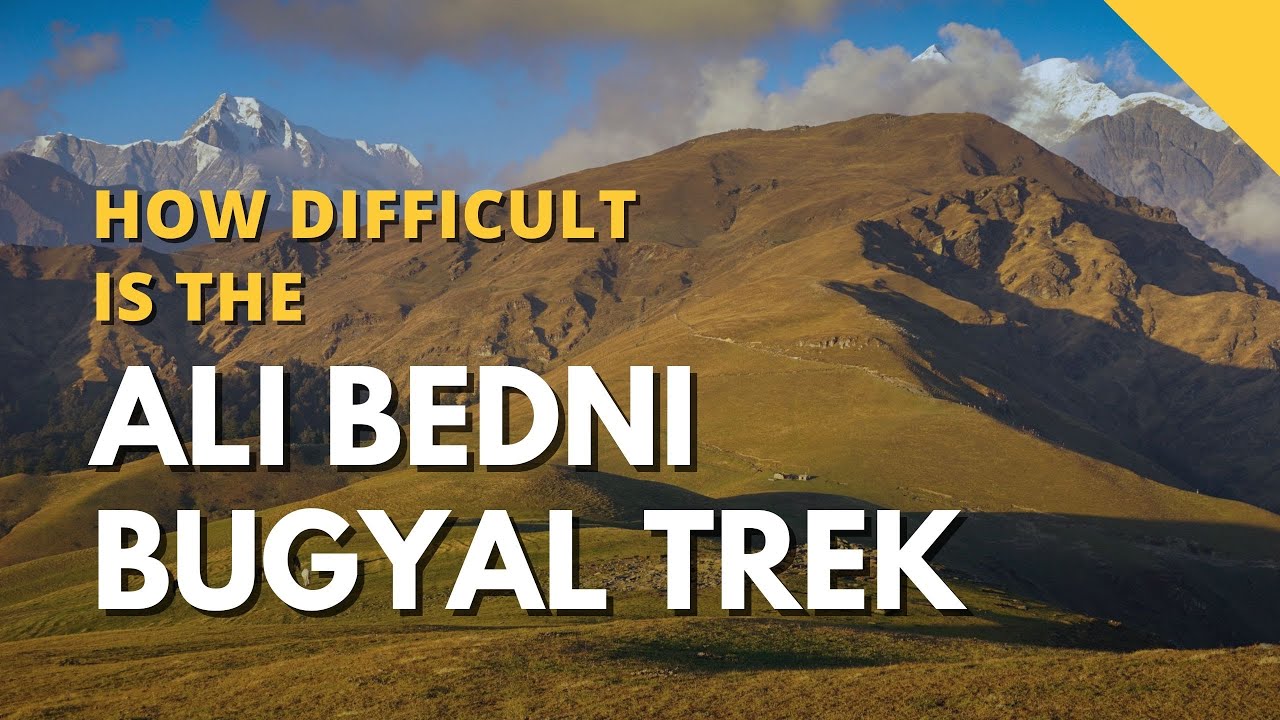